Check out some of the craft beers rolling in the door this week!

Alesmith My Bloody Valentine- Just in time for Valentines Day!  My Bloody Valentine is the red-blooded cousin of their Halloween specialty ale, Evil Dead Red. Caramel-sweet malt is delicately balanced with floral American hop varieties for a truly unique drinking sensation. A deep mahogany red color and a big, aromatic hop profile are the signatures of this seasonal ale.  Buy a bottle for your valentine!

Flying Dog HBC-431 Experimental Hop IPA- HBC-431 is a hop so new, it doesn’t even have a name. It’s an experimental variety from a cutting-edge hop supplier.  With a unique combination of melon, tropical fruit, stone fruit, pine and earth notes, their head brewer said it’s unlike any beer he’s ever been with.

Ballast Point Grunion- IN CANS!- Grunion Pale Ale wasn’t born on a beach, but in a backyard.  Originating from an employee-only home brew contest, this award-winning hoppy pale ale is named after the tiny local fish known for late night frolics on shore.  A pair of new hop varieties lend strong yet balanced summer melon aromas and herbal flavors, while a soft caramel malt sweetness holds it all together. ABV: 5.5%.

Russian River&Avery Collab Collaboration Not Litigation 2016- “Salvation. The name of two intricate Belgian-style ales, created by us, Vinnie Cilurzo of Russian River Brewing and Adam Avery of Avery Brewing.  After becoming friends a few years ago, we realized we both had a Salvation in our lineups. Was it going to be a problem? Should one of us relinquish the name rights? “Hell, no!” we said. In fact, it was quickly decided that we should blend the brews to catch the best qualities of each and create an even more complex and rich libation. In April 2004, in a top secret meeting at Russian River Brewing (well, actually it was packed in the pub and many were looking over our shoulders wondering what the hell was going on), we came up with the perfect blend of the two Salvations.  Natalie, Vinnie’s much more significant other, exclaimed, “We should call this Collaboration, not Litigation Ale!” “Perfect,” we shouted! We celebrated deep into the night (or is that morning?). Fast forward to November 14, 2006. After talking about it for over two years, we finally decided to pull the trigger and Vinnie made the journey to Avery Brewing to brew his Salvation exactly as he does in his brewery.” 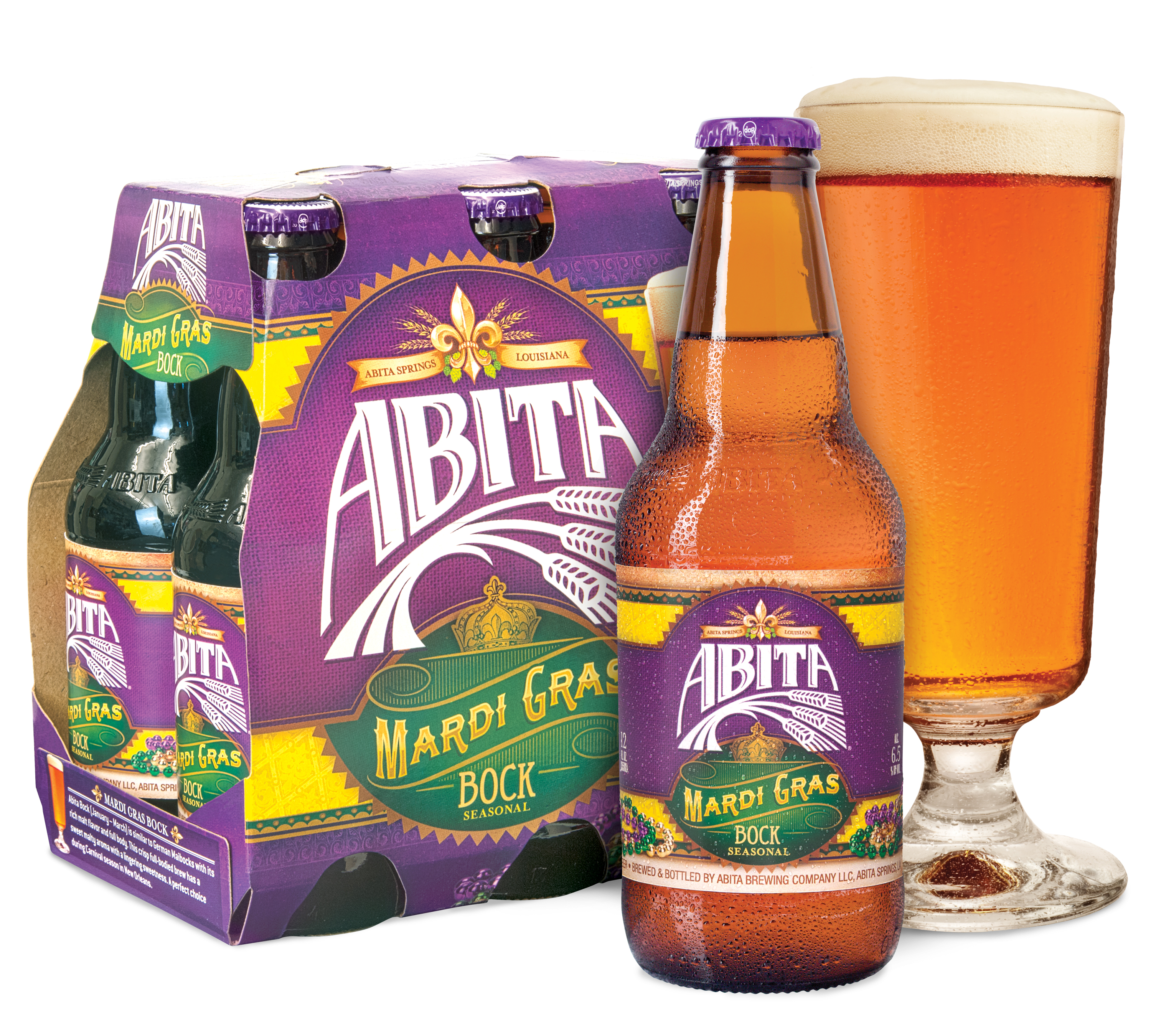 Abita Mardi Gras Bock- Mardi Gras Bock (January – March) is the first of their seasonal brews. Abita Bock is brewed with pale, pilsner and caramel malts and German Perle hops. This bock is similar to German maibocks with its rich malt flavor and full body.  ABV: 6.5%.

Abita Bayou Bootlegger Root Beer- Bayou Bootlegger is a decidedly adult take on the old-fashioned soda fountain root beers of days gone by. Gluten-free and sweetened with pure Louisiana cane sugar, this handcrafted beer delivers aromas of wintergreen, vanilla and sassafras, with hints of clove and anise. Enjoy its smooth, complex and satisfyingly sweet flavor as your go-to thirst quencher or paired with your favorite meal.  ABV: 5.9%.

Stone Xocoveza for the Holidays & the New Year- This fantastic chocolaty, winter-spiced mocha stout is back. This insanely delicious take on Mexican hot chocolate is crafted with cocoa, coffee, pasilla peppers, vanilla, cinnamon and nutmeg. First brewed in 2014 with San Diego homebrewer Chris Banker after his recipe was named the winner of Stone’s annual homebrew competition, it quickly became a cross-country sensation as craft beer media and fans cheered for Stone Xocoveza…and clamored for more. We’re so happy to see this one back!  ABV: 8.1%.

With so many awesome new beers arriving this week, you’ll have to be sure to stop in!

Happy New Year everyone!  For those of you who are giving up beer for your New Years Resolution (it’s a silly resolution, I know), you should stop reading now.  For the rest of you, here is a detailed list of some of the exciting new arrivals we will be getting at Cappy’s this week!

Founders Azacca IPA- Azacca IPA is brewed exclusively with Azacca hops, a special variety grown by Yakima-based Roy Farms. Named for the Haitian god of agriculture, the Azacca hop variety is distinguished by intense, tropical fruit notes. Azacca IPA includes a touch of caramel malt to provide a sweet backbone to the citrus, mango and orchard fruit flavors in this 7% ABV beer. The label artwork symbolizes the god of agriculture watching over a field where the ingredients used to brew the beer are being grown.

Dogfish Head Bitches Brew-  A dark beer that’s a fusion of three threads of imperial stout and one thread of honey beer with gesho root.  Bitches Brew has a 9% ABV and rates 99 on Ratebeer!

This unique release is a whiskey barrel-aged take on the brewery’s Small Batch 72 Imperial, an imperial chocolate cream stout. For every 100 bbl. batch, 400 lbs. of Rocky Mountain Chocolate Factory lustrous chocolate, made especially for 72 Imperial, are added to the brew. After spending a considerable amount of time in whiskey-soaked oak barrels, the finished product is molasses in color and smells of chocolate, wood, and whiskey harmoniously blended together. The beer has a dense and decadent mouthfeel and an abundance of rich flavors, including hints of sherry and dark fruit that compliment the toasted chocolate and oak notes remarkably.  ABV: 7.2%.

Alesmith My Bloody Valentine- Just in time for Valentines Day!  My Bloody Valentine is the red-blooded cousin of their Halloween specialty ale, Evil Dead Red. Caramel-sweet malt is delicately balanced with floral American hop varieties for a truly unique drinking sensation. A deep mahogany red color and a big, aromatic hop profile are the signatures of this seasonal ale.  Buy a bottle for your valentine!

Coronado Stingray IPA- Named after a serene Coronado shoreline where locals soak up sun and suds. This easy-drinking IPA will transport you to a tropical paradise the moment it hits your lips. Citra, Mosaic, Simcoe and Southern Cross hops provide flavors and aromas of tropical fruits and sun-kissed citrus with soft accents of nectarine and peach.  ABV: 7.9%.

Dark Horse Double Crooked Tree- “We actually took the Crooked Tree recipe and doubled all of the ingredients except the water, just the way a DOUBLE should be made. Big hops balanced with tons of malt give this beer a huge body. Enjoy right away or let it mellow and smooth with some age.”  ABV: 12%.

Sierra Nevada Otra Vez- Using the fruit of the prickly pear cactus, native to California. This tangy fruit is a great complement to the tart and refreshing traditional gose style beer. Otra Vez combines prickly pear cactus with a hint of grapefruit for a refreshing beer that will have you calling for round after round. Otra Vez! ABV: 4.5%.

Latitude 42 I.P.E.H.- Their #1 Best Seller! An India Pale Ale that  is a true classic for Hop Heads, using only the finest hopes from the Pacific Northwest. They use centennial, citra, simcoe, Columbus, and Chinook hops to balance out the smooth malty finish. 6.8% ABV.

Brooklyn Brewing Defender- This bright, juicy, West Coast-style IPA takes on a reddish twist from a dash of roasted malt. Bold, fruity hop bitterness and an intensely resinous nose lead the way into a dry finish that blazes the trail for your next sip.  Brooklyn Defender IPA was forged in collaboration with their sidekicks at New York Comic Con as the official beer of the convention.

Get in here and grab some of these brews before they’re gone!